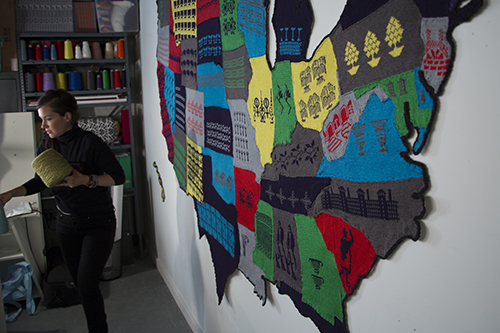 1845 Pennsylvania
Strikes of women workers rise out of the 10-hour workday campaign in Pennsylvania cotton mills. This motif is from a hand stitched sampler made by Amelia Smith in the mid-1800s.

1847 New Hampshire
New Hampshire became the first state to pass a 10-hour workday law. Sara Bagley, b. in New Hampshire, was a key figure in this effort. This motif is sampled from needlework made by 13-yr-old Louis Bean in the 1800s.

1851 Ohio
The Female Protective Union in Ohio improved working conditions in garment factories by increasing pay and reducing hours from approx 96 hours a week. The motif sampled from needlework by Rebecca Ballinger.

1860 Minnesota
Training schools for teachers open in Winona, Mankato & St. Cloud Minnesota. For the first time, women are allowed to train for professions outside home.

1869 Maine
Women shoe stitchers from Maine and five other states form the first national women’s labor organization: Daughters of St. Crispin. This motif is modeled after an image from the New England labor paper The Voice of Industry which illustrates 19th century mill girl.

1882 Indiana
Virginia Claypool Meredith (1848-1936) earned the title “Queen of American Agriculture” in Indiana. She farmed in Cambridge City and was one of the first women to lecture about crop and livestock production. This motif is sampled from Sarah Jenkins, an 11 year old in 1800s Indiana

1884 Georgia
Atlanta Washerwomen Strike in Georgia was organized by black women laundresses seeking to raise wages. This motif is sampled by Elizabeth Alston of Bibb County made in the 1800s.

1887 Louisiana
Sugar Strike Louisiana. The Knights of Labor presented a list of demands to the Louisiana Sugar Planters Association on behalf of the sugar cane workers. The Knights at that time did not exclude women or blacks and accepted workers of all skill levels. They are considered a predecessor to the more well known Industrial Workers of the World.

1890 Kansas
Mary Lease delivered speeches on behalf of Kansas farmers revolting against high railroad rates and mortgage interest rates. She believed big business made Americans into "wage slaves" and critiqued Wall Street. This motif was based on a Kansas quilt made made by Amanda Lewis or her daughter, Mary Jane Exoduster. Amanda first came to Kansas with her husband and children during the 1880s, settling near Concordia. She had lived as a slave in Kentucky before the Civil War.

1902 Missouri
Kate Richards O’Hare was one of the first women to join the International Association of Machinists in Missouri. She joined the Socialist Party and was imprisoned for giving an anti-war speech during World War I. In prison, she organized for better conditions for inmates.

1903 New York
1900 The International Ladies' Garment Workers' Union was one of the largest labor unions in the USA, and one of the first with primarily female membership. After the Triangle Shirtwaist Factory fire in 1911 New York the union got more involved in electoral politics.

1910 Utah
The Chocolate Dipper union organized for higher wages in Utah. In 1910, the union president Sarah Rindfleish met with the Salt Lake Federation of Labor who helped the striking women seek $10-per-week salary for 8-hour workdays.

1913 West Virginia
Fannie Sellins was an American union organizer. She worked in West Virginia for the mine workers. She describes her work as to distribute “clothing and food to starving women and babies, to assist poverty stricken mothers and bring children into the world, and to minister to the sick and close the eyes of the dying."

1913 Colorado
Tent cities were formed with resources from the United Miner Workers union, who organized Colorado coal miners. The miners had yet to gain the 8 hour work day and full enforcement of labor laws. Mary Harris “Mother Jones” gave a speech which led to the Fuel and Iron strike of 1913.

1918 Oklahoma
In February 1918 five of seven bookbinding companies in Oklahoma City agreed to increase wages when an agreement was struck between union members and company representatives. Women garnered a $1.50 a week increase the first year and a $1 a week raise in the second year. At that time men earned $24 a week, compared to $12 to $15 a week for women.

1918 Delaware
Margaret Irving Handy of Delaware became the state’s first pediatrician. Later, Handy collected surplus breast milk in the community to feed the babies of mothers who could not breast feed, and established the first mothers' milk bank at Delaware Hospital.

1920 Virginia
The same year women gain the right to vote, Virginia women account for 50% of all textile workers, 90% of all clothing workers, more than 80% of tobacco workers, and 45% of paper and print workers. This image of tabocco workers is from the same era. The motif was sampled from Sarah Jane Board of Oak Grove, made in the 1800s.

1921 Nebraska
1921 Three hundred women march in support of the packing industry workers in Omaha Nebraska. They are dubbed the “Amazon Army”. This motif is based on the popular “log cabin” style pattern as exemplified in this early 1900s quilt by Jane Blackstone of Frontier County.

1921 Wisconsin
In 1921, the Wisconsin Legislature passed the first equal rights bill in the nation, granting women full equality with men under civil law. The bill was signed into law by Governor John James Blaine and hailed by members of the Wisconsin Woman's Party.

1925 Wyoming
Nellie Taylor Ross was the first woman governor in the United States and is the only woman to have served as governor of Wyoming. The Wyoming Territory was the first to give women the vote in 1869. This motif references a silhouette of an American Bison modeled after the state flag.

1929 Tennessee
Margaret Bowen, worker at the American Glanzstoff factory in Tennessee, led a walkout of 523 women. The workers' protests centered on low wages, unfair promotion policies, and petty regulations that applied only to females. The motif is a lofi illustration of a quilt created in Elizabethton Tennessee, crca 1875.

1931 Kentucky
Florence Reece writes the miner song “Which Side Are You On” as a young girl during the Harlan County strike in Kentucky.

1934 Alabama
1934 Three counties in Alabama participate in what becomes the nation-wide General Textile Strike of 1934.

1937 Michigan
Woolworth workers in Detroit Michigan hold a sit-down strike and demand union recognition, a 10-cent per hour raise, an 8 hour workday, 50-cent lunches for the food counter workers, hiring of new workers only through a union hiring hall, and no retaliation.

1937 Florida
Luisa Moreno unionized African-American and Latina cigar-rollers in Florida. She also became a representative of the United Cannery, Agricultural, Packing, and Allied Workers of America (UCAPAWA), becoming the editor of its Spanish-language newspaper in 1940.

1938 South Dakota
The National Youth Administration (NYA) was a New Deal agency in the United States that focused on providing work and education for Americans between the ages of 16 and 25 during the years 1935 to 1939 as part of the Works Progress Administration. This image is of a NYA woodworking shop in Mission in 1938 South Dakota in Todd County.

1939 Texas
Emma Tenayuca was a life-long labor advocate in Texas. She founded two international ladies garment unions and worked in the Woman’s League for Peace and Freedom. She was at times arrested for her role in labor strikes, like in the 1938 Pecan Shellers Strike when picketers were gassed, arrested and jailed.

1947 Hawaii
1947 An industry-wide strike in 1947 Hawaii included women workers of the canneries and fields. Following the Pineapple Strike women’s wages were increased for this seasonal source of employment.

1954 New Mexico
1954 This motif is from a still of the 1954 film Salt of the Earth, based on a real strike at the Empire Zinc Company in Grant County New Mexico. Blacklisted Hollywood professionals helped produce it and miners who participated in the strike performed as actors. The struggle in the film is about women having equal expression in strike as men and unequal working conditions between Mexican-American and Anglo workers.

1955 Montana
1955 In 1955, Montana attorney general Arnold Olsen declared that “Marriage is not a ground for dismissal” and that “teacher contracts could not discriminate against married teachers.”

1963, 1973 Illinois
Betty Friedan, born in Peoria Illinois publishes the influential book the Feminine Mystique in 1963. This motif samples the graphic on the 10 year anniversary edition cover alongside the campaign logo for Wages for Housework (founded 1973). A Chicago chapter distributed their message on dishtowels to start a dialog about unpaid domestic labor.

1965 North Dakota
The state of North Dakota formed a commission modeled after the Commission on Status of Women. Chaired by Agnes Geelan they met with success in several categories: the law exempting women from jury duty was repealed (1967); an equal pay law was passed by the legislature (1965); and the law limiting women’s labor including denying women overtime was repealed (1965, 1976).

1975 Idaho
This motif is from an image of the Bunker Hill Mining Company in Kellogg, Idaho. Because of lead exposure concerns, the company required women workers to be sterilized if they wanted to work at the smelter. The union pursued research about the health conditions for both women and men and eventually it became a Superfund site.

1981 Washington DC
Ann Hopkins was the plaintiff in the landmark American employment discrimination case Price Waterhouse v. Hopkins. She was postponed promotion to partnership at the firm for two years in a row based on sex-stereotyping against her gender nonconformity.

1983 Arizona
Anna O'Leary served as the president of the Morenci Miners Women's Auxiliary during the Phelps Dodge copper strike of 1983-1986 in Clifton-Morenci, Arizona.

1993 Maryland
Gloria Johnson was a founding member of the Coalition of Labor Union Women (CLUW) and became it’s president in 1993. She worked on women’s and children’s health care, family and medical leave, and labor law reform. A life long labor leader in Maryland, she was appointed to President Clinton’s Commission on the Celebration of Women in American History in 1996. This motif is from a sampler made by Harriet Coopers of Saint Frances School for Colored Girls, Baltimore in 1849.

1999 Washington
National and international non-governmental organizations-- many concerned with labor issues, the environment, and consumer protection, created a mass demonstration at the World Trade Organization convention in Washington. The protests galvanized a lasting movement engaged with the struggles of globalization.